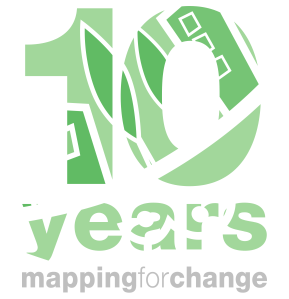 November 24 marks 10 years since Louise Francs, Chris Church and myself set up Mapping for Change. It’s a proud moment when the social enterprise that was set out of a research project at UCL is now well established, and the work that it does is mentioned in the annual report of the Chief Medical Officer, appear in the Guardian, and develop projects in many places far from its origin in London – including in Barcelona, Katowice, Valletta, and Kampala.

Mapping for Change came out of the Higher Education Innovation Fund (HEIF) funded “Mapping Change for Sustainable Communities“. Originally, we’ve approached Steve Coast and Nick Black to develop a community mapping platform, but they got busy with CloudMade and we were lucky that Claire Ellul stepped forward and developed the first version of the community mapping platform during her postdoctoral research. Claire is our unofficial co-founder and acted as technical lead for a long while. Mapping Change for Sustainable Communities was about to end in December 2008, and Louise, Chris and myself decided that we’re going to continue to utilise the platform and engagement methodologies that we’ve developed through a new organisation, so we set up Mapping for Change for this purpose. Originally, Mapping for Change was supposed to be set as a collaboration between London 21 Sustainability Network and UCL, but with the demise of London 21 in 2010, UCL became the main owner of it.

As to celebrate the 10 years, I’m picking up some activities and developments in Mapping for Change from each year, but first, I have to go back further – 14 years ago: 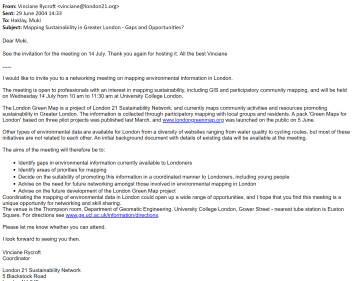 2004 – this email, from Vinciane Rycroft, at London21, who at the time developing their innovative online Green Map for London, was to establish a connection between UCL and the organisation. Following this, I learned about London 21 effort to record community-led sustainability activities across the city and represent them. The meeting in 2004 eventually led to the development of “Mapping Change for Sustainable Communities” project and the creation of Mapping for Change 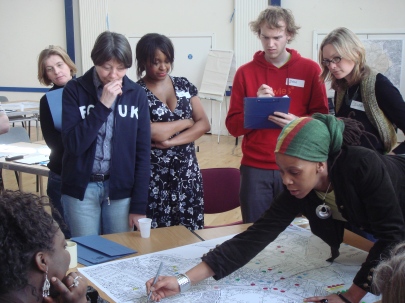 the basis for Mapping for Change was an extensive set of workshops that were carried out in different areas in East London. The image is taken from a workshop at Hackney week in March 2008, which was eventually digitised and shared on the new community mapping platform – and in this image both Louise Francis and her London 21 colleague, Colleen Whitaker, leading a participatory mapping workshop. 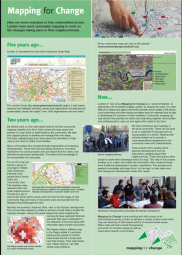 2009 – With the first brochure and also a description of existing activities, we started securing the first projects that were paid for. These included working with different faith communities across London on sustainability issues, and also a map of food growing in Brixton (linked to the Transition Town group there). Another project started at the time was with UCL Development Planning Unit around Hackney Marshes. 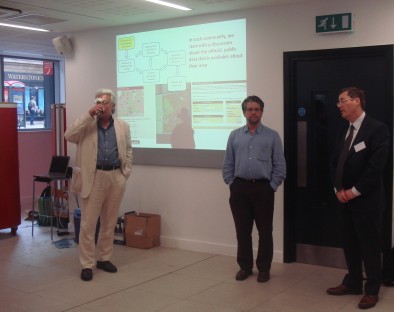 2010 – the official launch of Mapping for Change at UCL included an endorsement from Steve Caddick, the Vice Provost for Enterprise (in the picture on the right). We have also started working with UCL Public Engagement Unit on understanding the relationships between UCL and the local community that live around it. Most importantly, we have secured a social enterprise award from UnLtd, as part of their programme to support social enterprises in Universities. We also started to carry out air quality study in the Pepys Estate. Some of our work was covered in GIS Development. 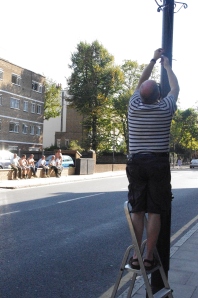 2011 – the work on community-led air quality monitoring started to expand, with studies in Highbury and Islington. We also carried out work on mapping activities in canals and waterways and helped The Conservation Volunteers to assess their impact. As a UCL champion for social enterprise, it was possible to encourage the institution to support activities such as those of Mapping for Change in a more organised way.

2012 – the main change to the company in this year happened with the help of UCL Business, the technology transfer office of UCL (and in particular Ana Lemmo). We changed the registration to a Community Interest Company (CIC) and also made UCL the owner of the company, which made it the first CIC that is completely owned by the university. 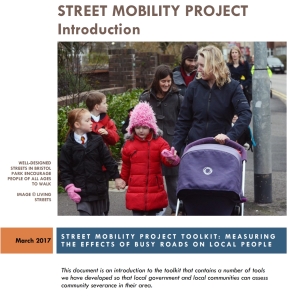 2014 – Mapping for Change was used for an Impact Case Study in the research evaluation framework (REF) exercise that year. This required explaining the work that was developed in the first 5 years of operation, and in particular air quality studies. During this year, we’ve hosted Karen Martin, who carried out a participatory mapping project with people who use foodbanks (see her slides below). During this year, we also secure the first major EU research funding for our work, through the CAP4Access project, as well as UCL Street Mobility project. At the end of the year, the new database system for managing community mapping – GeoKey – was released by UCL ExCiteS and form the basis for a new Community Mapping system.

2015 – we have started collaborating with the Engineering Exchange at UCL, and provided training in participatory and community mapping. We also released the new community mapping system – updating and replacing the software that was used from 2008. This was an extensive effort that required significant investment. The new system facilitated the creation of maps for different clients – it was possible to create a bespoke front page for Eco21 in Poland and other organisations. At the end of the year, we carried out a crowdfunding campaign to raise funding to support community-led air quality projects (see also here). We also helped the London Borough of Southwark to carry out a consultation on its development plan. You can also find notes from a talk at the Building Centre on Mapping for Change activities.

2016  – the year started with the launch of a new Horizon2020 project, WeGovNow! which is now its last stages. With the growing concern by the communities around UCL on the health impacts of HS2 development, we collaborated with a visiting researcher (Irene Eleta) on understanding the interactions between researchers and communities on air quality projects. We also had our first contract with the University of Malta and providing them with a platform for community mapping that they can use for different projects. 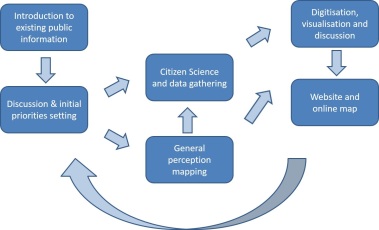 2017 – 10 years after it was originally developed, the participatory methodology that we use is published in the Routledge book of Environmental Justice, another major change happened in the late part of the year, with the office of Mapping for Change relocating to Mildmay Community Centre in Islington. This was, in some way, a close of a circle, since in 2008 when we just started, working with the project Citizens Science for Sustainability (SuScit) which was running in Mildmay was considering the use of community maps, and in 2012 Cindy Regalado carried out one of her playshops in the community centre as part of her research in ExCiteS.

2018 – Mapping for Change is now well established, and running multiple projects – maintaining the online maps, participating in Horizon 2020 projects – a new one, D-Noses, just begun, and being invited to participate in tenders and proposals. Nowadays, I actually know that I don’t know about many of the interesting projects that are happening. It operates in synergy with the work of the UCL Extreme Citizen Science group and continues to grow. It is a successful example of a knowledge-based social enterprise.

There were many people that helped Mapping for Change, worked or volunteered on the many projects that were carried out over the years – and this is an opportunity to thank all of them!

Today, we're celebrating 10 years to @Mapping4Change – OTD in 2008, @chrisjchurch2 @Naledi08 & me registered Mapping for Change, originally as a joint venture of @ucl and London21 Sustainability Network. Here is a thread on what happened since then (and before)… 1/18🎂🎖️🎉 pic.twitter.com/eXOoA5zlbl

One thought on “10 years of Mapping for Change”