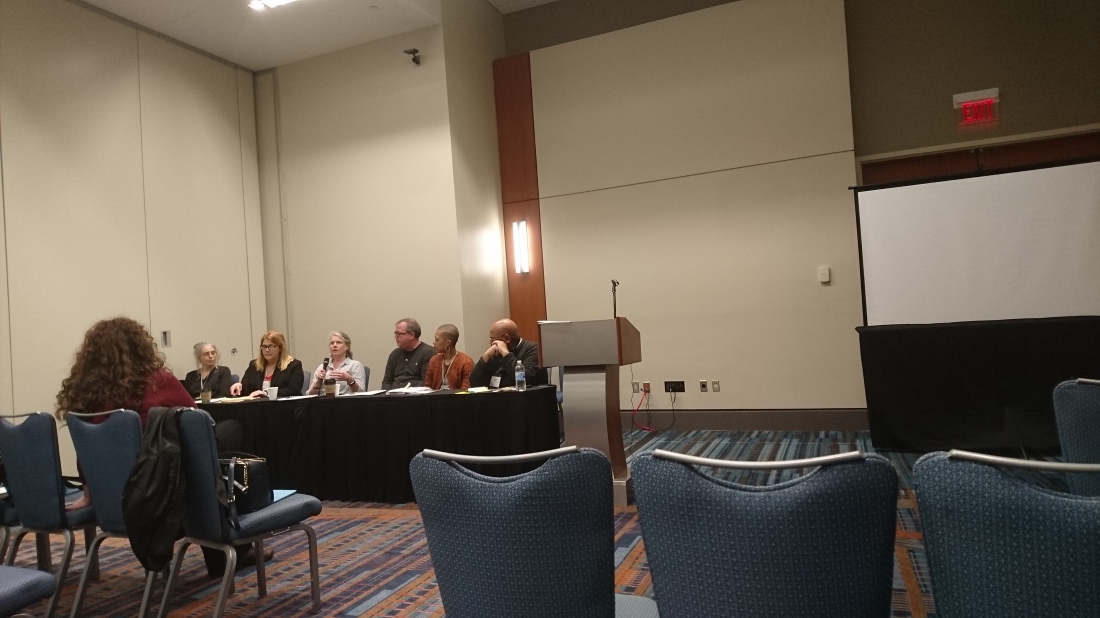 NSF mission is to promote the progress of science and the budget is about $7b, promoting thousands of projects mostly 3 years. Funding basic knowledge that can be generalisable. The intellectual merit and broader impacts are both important. Broadening participation of underrepresented STEM groups came from work in 2008 and now have the includes programme. Creating people where everyone has an opportunity for a career in STEM – dealing with geography, gender, ethnicity etc. There are about 150 projects that are being funded to 225 at any given moment. Citizen science has intellectual merit – theory of citizen science, or broader impact – engaging new groups.

Omega Willson – in NC and 45 miles west of Raleigh and have been doing 25 years where they work on citizen science and started to engage 2 years ago. The relationship with the CSA is to diversify the conference through a sub-committee of the conference that paid attention to it which was in the panel yesterday. 60 scholarship for community organisations to bring people to the conference and increase representation. There are issues of labelling of community research and the process of networking will help in labelling and a way to increase support.

Fay – in the division of computer network systems, and they are funding a big chunk of projects and they are not under the label of citizen science. In the division, there is an effort of increasing participation in computing engineering – e.g. AI, smart cities, etc. They defined broadening participation very broadly – lots of identity markers to bring people into the portfolio. It is about equitable engagement – in the community, by the community. A process and a measurement effort. What does it mean to inform the PI and what should be done. Part of it is to understand the review process and they include criteria for broadening participation in their panel: less about diversity and more about inclusion. Cultural and organisational change in the NSF, e.g. in large grant call. Also involved in NSF Includes and it is more nuanced in its criteria and the ethical issues are embedded – working with community partners etc require to define shared goals, vision, how to sustained the efforts and how it is measured. How to evidence it.

Todd – part of the DIY Bio community and funding community biotech labs, and try to raise some of the issues with such grants. Applied for community biotech for the Baltimore centre that is at the forefront of engagement – inner city and touching underrepresented community. The review was very positive, but one of the issues was that no partnership with a university was too high (e.g. BUDD) and concerns about bio-safety and biosecurity. An organisation that is very small it is very difficult to get into but they are the places where innovation in Includes happened and creating STEM opportunities. The Wilson Center couldn’t pass the criteria of NSF, which a small organisation that run by volunteers cannot pass this hurdle. Partnering with universities means losing lots of money. Money in the crowdsourcing area have a particular opportunity to raise a significant amount of money and what are the ethics of funding projects and how to avoid selling false hopes, or what about the data that come from such a study that it wasn’t coming from the same place.

Stacy  – CitSci.org was created in 2007 and it engaged broad participation in research anywhere, with access to technology. The system is about “helping you to do great science” and it is defined very broadly. Through conversation with potential users, decided that it’s not their job is to police participation or projects, but they need to create a platform that will allow people to make decisions about their projects and their ethics (in the new issue of CSTP). The project manager can decide who can participate in the project – from open completely to selected individuals. Openness decision about the data is also for each project because of privacy, or endangered animals. To make it available to most users, governance is done by people who know their project. The NSF funding came from multiple programmes. They’ve done business modelling and got funding as an infrastructure. Ethics is a complex issue and long engaged conversation about the choices.

Lisa – as a philosopher and teaching research ethics, and there are many places where research is done outside regulations and done a workshop on ethical issues in citizen science and it is a very complex problem. Citizen science and DIY bio can reimagine the way we govern research – research framework that was articulated in the 1970s and in IRB you don’t consider community harm, so broadening participation changes the way we engaged. At the moment there is a struggle exactly how to create a framework – possibly a philosophy of trust, and including ensuring data quality, trust with community members, and trust with the ethics. There are ethical worries: there are things that you might fall into, and nefarious people – the grandfather of Alt-science: separating good science from bad science.

Caren – discussed topics as Vespucci and it came up in citizen science projects and got interested in it. She now teaches ethics and makes the students grapple with ethics issues. Problems from her own projects – top-down projects with different funding and outcomes. The IRB oversight treats them as human-subject research. Sparrow Swap is about contaminant and it falls between NSF and NIH. There are issues with IRB and assuming participants are anonymous, but that will mean that we can’t acknowledge them! In Sound around Town, there is an issue of informed consent and everyone is open about it and need to get third-party consent to recording sound. In a new project about testing for lead pipes, they want to pass the responsibility to the participants to decide what will be shared and how. She also develops norms around data ethics. Good data also means that it was collected ethically.

Regarding sharing information – the participants decide which data should be shared and with whom. Omega – questions about race and racism in communities, and there were cases of professors sharing information with officials about names and not realising that they should respect other people. They had to get lawyers to force the researchers out of university for revealing details. They had to tell some researchers not to come to their area again. There is sometimes a need to use lawyers and a legal settlement with research institutions. The moral issue needs to be addressed.

Regarding issues of data – Stacy working with communities in East Africa and the data need protection, and with CitSci.rog there is a need to co-create protocol for doing projects to work through a series of questions: is it for people, and providing tools and procedures. If you work with communities, have you consulted the community about it. Pre and post work checking to inform the decision making. Fay – skipping a level, the implications of sharing are overlooked – data literacy and implication. Lead pipes are one thing, but there can be an impact on education funding for the area due to a drop in house prices. What are the implications and making the decision require an understanding of the lived experience? We have to consider the implications. Even with contributory projects, there aren’t communities and it interacts with individuals and if there isn’t a framework or organisation that addresses community consent.

Issues of community harm perspectives in terms of reviewing the ethics is always done at the individual and not with groups. In crowdfunding and crowdsourcing – there are side effects: figuring out the person that collected the data, addressing groups and not individuals. Crowdfunding might be completely outside the control of institutions. There will be a potential that lots of research will be outside the IRB regulation, and Lisa says that the CSA need to put structures in place. Tom – there is a risk that data will not be available for use by researchers in the universities. Todd – the DIY Bio community have its own code of ethics that was created bottom up, and in iGEM there is an effort to educate people in the competition to consider ethical and societal aspects. Universities should be educating students about ethical issues. John – However, there are different ethical codes for DIY Bio between US/Europe which indicates the cultural difference, so need to have both a top-down approach for responsibility and some role for institutional oversight. Omega – we need to discuss issues of the legal framework.

Fay – there are specific ethical guidelines (e.g. from ACM), and the citizen science and inclusiveness are included with the general way in which the field operates. There is a call about starting to teach computer scientists to understand the implications of technological development and ethics. Stacy – teaching all undergraduate students in the ethics of their work, and starting early. Caren – the citizen science approach might cause us to rethink frameworks that we have, such human subject research. We might need a poly-centric framework for oversight. Fay – the issues of collectivism and individualism are coming to the fore in citizen science. Ellen – because the NSF is spending federal money, they need to stand certain standards to get through a Federal Audit and that blocks organisations.

As more & more #CitizenScience projects are NOT run through universities with Ethics Review Boards, how do we ensure there are still ethics reviews to protect individuals and communities? Independent cit sci reviews + discipline-specific codes of ethics? #citsci2019