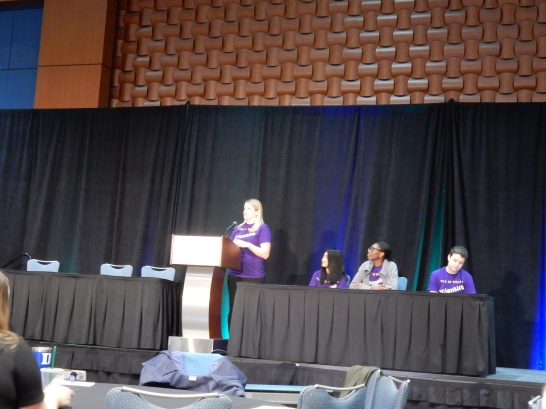 The second day opened with an introduction to Kenan Fellows https://kenanfellows.org/ which is a programme to link teachers and provide STEM experience, and therefore they integrate citizen science in schools. Following this, Rachael Polmanteer, who is marine biologist turned 8th-grade science teacher, gave a keynote. Rachael is from Bath, New York (state) and she grows up near nature, with walks to the woods, and lake etc. She was always interested in science – her parents took her to science museums and supporting her interest – driving through zoos, visiting natural history museums, watching whales and were very supportive. In high school, she had to decide between earth science and biology – and Mr Ryan, her earth science teacher who was making it exciting – she hated rocks originally, but her teacher made it alive for the students. He invested in his students so they get a very high mark – 94% as a class average. He made a huge difference and helped each student. When she finished schools, she went to study biology, and got a job in Hawaii working with endengered birds, and continued to share information on Facebook to Mr Ryan, and the linkage was “hey, Mr Ryan, you wouldn’t believe what I’m doing now” and made the connection. So – who is YOUR Mr Ryan?

Teachers matter – they change your path, where you’re going. Education was aligned with what she was doing – in the zoo, and in Hawaii, she created a community outreach day which is a single day for the local community to learn about the endangered birds. She moved back to New York state because of wanting to be close to her family and created a not-for-profit – http://www.rachaelsrescues.org. In 2015 she thought about becoming a science teacher – she knew the science, but the teaching was scary. Your first-day teaching: the life of kids dependent on me and you don’t want to mess up with it. She also wanted to do real science with the students. She was told to apply for the Kenan Fellowship. She was interviewed at the point that she had 8 months of experience and got the fellowship in 2016. She was paired with Dr Schuttler and embarrassed Rachael and was sitting at the museum, setting a curriculum so the students can do citizen science. 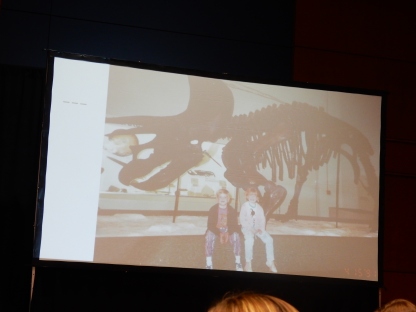 With the students, she set a camera trap and share the data and that led to 140 students that engaged in the eMammal programme. One of the students, Troy, was not interested but once a best friend was doing it, she wanted to do it too – and she joined science in high school and in college as a result of her involvement in eMammal. She then found herself presenting in the CSA conference in 2017, but the conference changed her – she developed appropriate ways to teach students and use iNaturalist to ensure that data is good quality. Have done bioblitz with 14 years old that got very committed to nature. Another example is an opportunity for students to participate in digs, and as students analysed shark teeth, they discover new information and the students continued to talk about their discovery for a week. With 36 kids to analysing information, there is plenty of work that can be done. With eMammal programme, she extended the effort or a bioblitz to the whole state with over 2000 students carrying out data collection on the same day. This year, created pollinator boxes in school.

"90% of my labs are #citizenscience" based. (My students) want to do science for (scientists). Why do a regular lab when you can do one that matters? @rmp4412 #CitSci2019 pic.twitter.com/v59cyNXmZR

A statewide BioBlitz founded by @rmp4412 and @lena_deskins got 2,000 kids outside! This is so important for their mental and physical health, but also conservation. https://t.co/CbRJbWYely#CitSci2019

In terms of outcomes – there is a clear growth in the success of students as a result of participating in citizen science and being successful in their exams. Now she went for 90% of classes as citizen science: it changes the student thinking, it changes their engagement.

"By doing citizen science, my students have shown growth. They are passing their assessments.” @rmp4412 #CitSci2019 pic.twitter.com/Vr3ng6ywUc

Reyna Martinez, a student of Rachael, talked about her love of science, and interested in the fact that we don’t know about the ocean, and is interested in learning about nature and science. Making a difference and making the world a better place is something that excites her about science.

Yechielle Sabally, another student, talked about the growth of a bean in a bag, but in school also learn about water sampling, bacteria behind the ear, and learn about real science and helping scientists in their work.

8th grade student, Yechielle: "I love my science class as it is real science – it's #citizenscience"#CitSci2019 pic.twitter.com/KFgCjT1pom

Kaden Braye talked about the experience of doing citizen science – doing good in the world, and helping scientists in their work.

Favourite projects include Rob Dunn sourdough project, and eMammal because it allows students to see animals from all over the world.

Citizen science in schools: be aware it can be intimidating for teachers – valuable to have educators to relate projects to the school curriculum #CitSci2019

The combination of citizen science project into the curriculum is done by sharing information between teachers and building the teaching around the project. She has the experience of how to link projects to the curriculum.

The next stage is to move from contributory projects to projects that are designed by the students and creating your own questions is a challenge, but once students learned how to do science, they can do it.