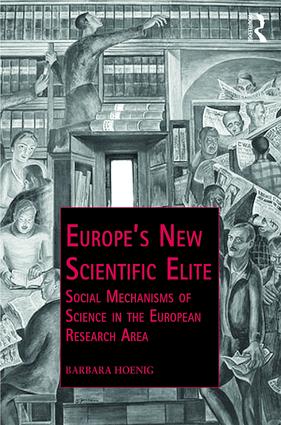 I never knew that with respect to the European Research Council (ERC), I belong to a (small) group called “Dual role incumbents”. Not until I’ve read “Europe’s New Scientific Elite: Social Mechanisms of Science in the European Research Area” – A book by Barbara Hoenig which came out in 2017. The way I heard about the book is very appropriate – in June 2017, after the end of an ERC panel and a long week of interviewing and making decisions about ranking proposals, the sociologist Peter Wagner mentioned that the first book that analyses the ERC has come out. Being both a grantee of an ERC Advanced Grant and a panel member, this interested me. Although the book is written in a fairly technical language and not an easy read, the message that is emerging from it is important and should be noted.

The book is analysing the processes that are happening in the social organisation of science in the area that is under the influence of the European Union research investment over the past few decades, and in particular, the role that the ERC has been playing within it in the past 10 years. The EU Framework Programmes have slowly become a dominant funding source and they are shaping the focus and operation of science and technological research across the European Research Area (ERA) which includes 24 member states and 5 associated countries, with agreements with further countries, such as Israel, Ukraine, Armenia, Georgia, etc. (trying to figure out the purpose, operation, and practicalities of the ERA is not a simple task!). For the purpose of understanding the area of influence, the map above provides the geographical region of influence of the ERA.

Hoenig takes an analytical sociology approach where she collects and analyses a significant amount of statistical information, qualitative information (e.g. CVs), and interviews, and then build up the narrative of micro and macro actions that lead to an explanation of how the system operates (see below her core system from Figure 4.3 in the book). She’s following Robert Merton in using “middle range theory” of the sociology of science. While I haven’t read Merton, it looks like Hoenig is following Merton in her focus on the sociology of science and in the methodologies that he used.

The book includes an analysis of different science systems across Europe, showing how cultural differences between countries lead to different types of systems – e.g. the UK system which is market-oriented, versus the German one, which is state-led, or the nature of programmes to promote “excellence” in different countries. She also explores the anxieties of European policymakers regarding the position of European research in the world, and the balancing of investment between different fields of science (e.g. social science vs. natural sciences).

The core of the analysis is the change in the purpose of the European Union research funding from sharing knowledge, improving collaborations, and enhancing capacities of the weaker countries and places so they can benefit from investment in science and technology, to a system that emphasises “excellence”, and then define it with a set of parameters that provide advantages to some actors, who are then becoming dominant (Hoenig call this process “Oligarchisation”). In particular, the analysis is concerned with the Matthew Effect: “independent of the actual achievement of researchers, those having already gained a reputation in science will gain more, whereas those who had not yet made their mark are literally deprived of their efforts.” (p. 26)

A later part of the book is dedicated to the analysis of the ERC itself – both in the characteristics of grantees (unfortunately, she didn’t have access to the CVs of all applicants, so we’re looking at a survival bias of those that secure the grants and therefore can be identified), and at the composition of the panels of the ERC, who are the gatekeepers which define what excellence is through the act of giving (or refusing) funding. This is where the “dual role” come in since the ERC integrates grantees in the panel – likely based on the assumption that those who are doing excellent research can judge one. It is interesting to see how in some scientific fields, European based research is used to define excellence, while in others, the reference is to research in other parts of the world. There are also issues about disciplinary funding allocations – e.g. for humanities and some areas of social science, there are no equivalent large-scale fellowships from national funders (e.g. in the UK, as expressed in the British Academy report on the ERC) while in other cases, the value of the ERC is in kudos, and researchers have other sources of large grants that they can go after.

Hoenig points out that the focus on excellence lead to some unintended consequences: “1) A huge grant concentration in only a few countries and institutions of Europe, instead of overcoming a fragmented landscape of integration; 2) a perpetuating ‘European Paradox’ of deficient innovation investments when compared at a global scale; and 3) a diminishing concern for promoting public research of societal relevance for European citizens” (p. 118) – since I’ve already participated closely in about 6 European projects through FP7 and Horizon 2020, and especially since “Doing It Together Science” is part of the Science with and for Society, I have seen points 1 and 3 in operation. I’m lucky to be in one of the institutions that are noted in 1, and there are many mechanisms that reinforce the Matthew Effect: from a very experience office at UCL that can support both the application process and the management of projects, to the existence of multiple examples for successful applications, which are accessible to researchers inside the institution and, therefore, increase their likelihood of securing further funding. Point 3 is also clear from the little funding that the Science with and for Society received in Horizon 2020 (only 0.6%), and the fact that no such funding is expected (at this time) in the next Framework Programme (Horizon Europe).

One aspect that I found missing in the analysis is how the focus on excellence moved from groups and institutions to individuals, which is quite central to the process that led to the way the ERC operates. I have a personal experience in this since on the one hand, I’m a beneficiary of the switch from the thinking that excellence is coming from groups to a view that individuals should be at the focus of these initiatives. You can see that in the transition from the way the UK examined groups of researchers in the Research Assessment Exercise, to the Research Excellence Framework that scores individuals along a scale of excellence. In a more explicit way, this is appearing in personal fellowship for people in early stages of their careers – in other words, “picking winners” (and by necessity, creating a big group of losers). I benefited from the EPSRC Challenging Engineering, and then from Further Investment that was given exclusively to this group, and now from an ERC Advanced Grant. On the other hand, I fundamentally disagree with the assumption that the world is driven by unique individuals, and that thinking this way can contribute to creating a toxic environment (as Athene Donald described) as some (many?) people who get the message that they are special, adopt the wrong idea about their own importance. If you look at all the three projects that I secured through the excellence programmes, I’ve done them in teams – for example, in the collaboration with Dr Jerome Lewis, which is noted clearly as co-director of the Extreme Citizen Science group in our ERC application. As someone who read a fair amount of applications, I can say that the message that is received by researchers is that they need to present themselves as these special individuals. This is a very unhealthy way to develop science (and a fourth side effect to the list that Hoenig identified).

There is a big clash between this “special individuals” concept with the demand for “interdisciplinarity” which is common in general European Union funding and in particular in ERC expectations and applications. Hoenig pays attention to this aspect too, but the individualism aspect reinforces the project: It can be difficult to have a fair exchange that can lead to new ideas across a research team if the individual grantees are thinking that they need to be such omnipotent, potential Nobel laureates researchers. They are positioned, a priory, as the principal investigators that set the whole project and set the direction to the people that they hire, and I’ve already heard about cases of the toxic issues that were pointed about, which happened with early career researchers under these conditions. Somehow, I would think that ERC for small teams will be much better to address interdisciplinarity – beyond the Synergy model that is currently offered.

Overall, the book is written as a series of papers in rather factual, dry, prose. Yet, I found it very helpful in positioning my experience within these wider processes. A summary of it can be an excellent introduction to ERC panellists to think about the way their judgements shape the landscape of European Research.

The book is also up to date, and also point to the Brexit science impact: “the EU current political disintegration merges into the paradox that those universities and researchers that perform most successfully in attracting ERC grants are placed in a country whose population’s majority voted against continuing EU membership.” (p. 118) This might be another indication of point 3 above – not clear enough links between societal concern and researchers actions…