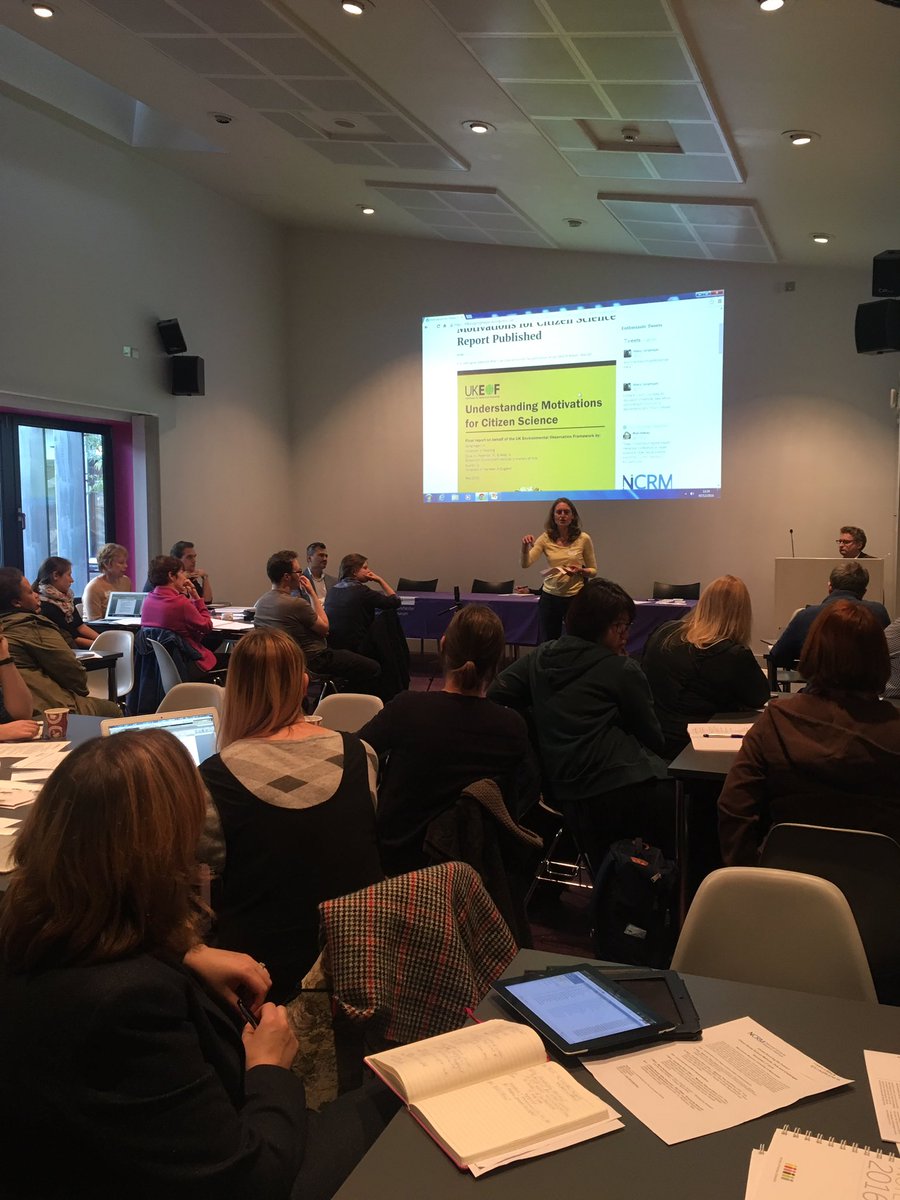 About a month ago, on 7th December 2016, DR Kingsley Purdam (Manchester) organised a one day workshop on citizen science, and in particular on citizen science from a social science methodological perspective. The day organised with the support of the National Centre for Research Methods (NCRM).

The purpose of the workshop/conference was to explore the future of citizen science and citizen social science methods as research tools. In particular, understanding the different types of applications, methods, the data and the challenges posed. Because the point of view was based on methodologies in social sciences, issues about expertise, divisions of labour, different ways of seeing, data quality, questions about what might still be going undocumented and the ethical issues raised were all discussed.

The workshop was structured around two blocks of discussion – the morning around methods, data and ethics, while the after looked at issues of participation and working in the area of policy, as well as a discussion of the specific issues that need to be discussed for a citizen social science project.

As an introduction, both natural science and social science projects were presented. You can find a summary on twitter of some of the points that came up during the day with the hashtag #crowdfutures.

Some of the important tweets are captured here with comments (bit storify style).

Chris Lintott started the day with a discussion of large-scale, online citizen science projects, with the story of Zooniverse.

People participate in Zooniverse because they want to do something useful, and he pointed to the complexities of combining machine learning with citizen science effort while maintaining motivation and interest.

While I presented after Chris, and mostly talked about a more social theory explanation of what Extreme Citizen Science is – in particular, the creation of technologies that are embedded with a social participatory process. Many of the processes that I described were small-scale, and local. I have also pointed to the growth of citizen science and the Doing It Together Science project that we currently run.

However, in the discussion that followed we agreed that the nature of participation and many of the issues that come in these projects are similar across the scales even if the mechanisms for engagement are different.

Ben Rich (BBC), covered issues of engagement in weather observation that the BBC implemented successfully, with million observations and report in the first year

Hilary Geoghegan (Reading) & Alison Dyke (SEI)  talked about the UK EOF study on the motivation of participants and the ethics of participation, as well as the tensions between contributory and co-created citizen science in environmental research.

Will Dixon (Manchester) described the Cloudy with Pain project which engaged 12,000 participants and receives substantial information. The project also experiments with some access to data and opportunity for analysis by the participants themselves.

Kingsley Purdam (Manchester) talked about the complexity of citizen social science about begging, when the beggars are involved in data collection. Another Manchester-based project looked at linguistic diversity in street signs

The next set of talks raised some important point, including by Erinma Ochu on the process of creating the Robot Orchestra as a participatory DIY electronic and creative process, raising issues about expertise and success (the orchestra is in very high demand); Monika Buscher (Lancaster) emphasising that citizen social science is not about bigger torch to understand reality, but critique science & social science; and Alex Albert (Manchester), who run @EmptyHousesProj project to encourage citizen reporting of empty houses and consider what should be done with them, highlighted the challenges of starting a project and recruiting participants. Liz Richardson (Manchester), talked about the interface between participatory action research and citizen science, and described her work with a community who collected data and asked for guidance on how to analyse it. The three talks by Monika, Alex, and Liz raised many issues about the participation of people in different stages of the research process, and the role of established researchers in such projects.

The last set of talks focused back on ecological and medical projects: Rachel Webster of Manchester Museum explained the museum digitising effort, and how they are making progress one MSc in computing student at a time – the integration of citizen science with small museum activities is a resource challenge, so the work with students require some compromises. There was also a demonstration of setting systems for citizen science and then discovering how they are used:

Lamiece pointed that a challenge with such approach is to get the app downloaded and to see continued use, although so far there are 1500 participants, 800,000 observations. There is also Data challenge of presence/absence reporting to make sense of what the data means.

Ian Thornhill fro mEarthWatch who coordinates the FreshWater Watch project demonstrate how simple data collection tools open up space for participant’s innovations in tools and in data collection. He also provided different models of how projects are run – corporate sponsorship, or by payment from interested communities.

Some of the points in the discussion include the need to balance scientific data collection and activism (especially for projects such as those that Liz Richardson described). Also balancing small scale, deep engagement or large datasets, wide engagement – e.g. for 3 years as researchers on projects that got limited funding and a goal. The need to consider what participation is doing to citizen science, and what science is doing to it? How to balance between the two? and in general, the wider societal impacts of projects cannot be ignored. There are also people that coming from a policy perspective, and try to push for procedural aspects, not interested in engagement issues.

3 themes coming out of #crowdfutures: remove #citizenscience jargon for participants, create space to have fun, open paths to deeper engmnt

There are also ethical issues such as those that relate to volunteer management – what should be done with contributors that are not doing good work? exclude them? train? ignore them? There is a constant need to think of useful roles and how making people valued for their contribution.

Another set of questions explored what citizen social science does to science? How are issues about ownership,  responsibilities to ensuring data quality integrated into project planning and management?