I’ve been working with Geographic Information Systems (GIS) since 1988. During the first 2 years, I wasn’t even aware that what we were doing was GIS – it was a mapping/inventory system that run on second generation PC (80286 processors) and was used to map facilities. Once I’ve discovered that this was a GIS, the next thing was ‘and ESRI Arc/Info is the software that you should check’. I’ve heard a lot over the years about the Esri User Conference, but haven’t had the chance to attend it, so this year I’m filling in the gap in my experience of the world of GIS. I’m giving a keynote at the Esri Education User Conference (EdUC), and I’ll attend some other parts of the general User Conference, and report on the experience.

The Education UC opened up with interest in creativity. Angie Lee, who opened the conference, noted her inspiration to the theme from learning about the makers movement and the growing interest in teaching students to code. She noted that many aspects of GIS encourage creativity: developing a story map or building an app. The opportunity that are emerging with new technologies  This is also true in science for the development of hypotheses and methodologies.

The two keynotes on the first day are by Dave Zaboski 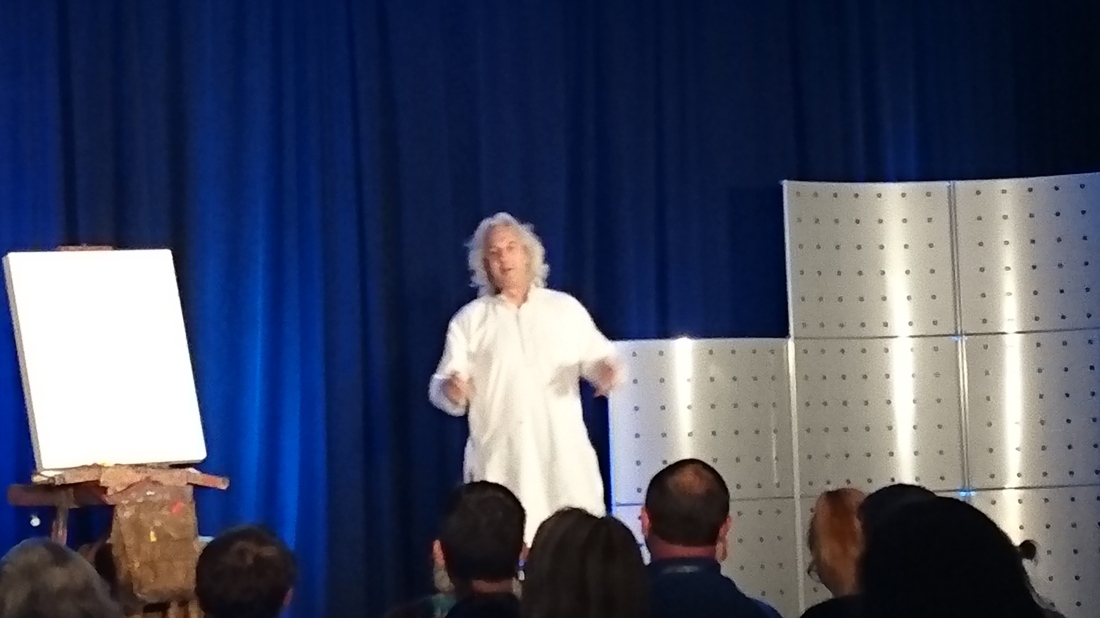 (Professional Artist / Creative Consultant) a former Senior Animator with Disney. Dave suggest that people have an innate ability of creativity. Creativity that is common at a young age but disappear later. Creativity is the willingness to do try things, it’s the courage to take risks. It’s the act of turning a thought into a thing, but we tend to get lost in the process. Resolute imagination is leading to magical results. The approach that he suggests is highlighting a spiral iteration instead of trying to move directly at a goal. There are five key attributes: first – believe in what they are doing. Have a clear narrative, and trying to reduce noise to increase the signal. You can think of things you have no control about them (A list),  issues that you can influence (B list), and a D+ list of things that make you lighter & happy, that make the ‘signal’ in life. The A list should not considered – someone else is going to take care of that and it will be their D+ list. The B list, can be solved at one thing a day, and then focus on the main issues. Then you can focus on the D+ list. Need to collaborate, and risk in a powerful way – when iterating you need to be confident that you can try again. Need to know that it might require throwing work that you have already done. Need to learn to trust you own abilities. Need to be able to allow instead of cognitive dissonant to have allow for information to have creative confusion until the information organise itself in a way that make sense. Completion is also important: acknowledge that people that were involved, analyse and celebrate. When you can declare that you have completed, you can move to the next challenge. Creators believe, iterate , collaborate, risk, and complete. 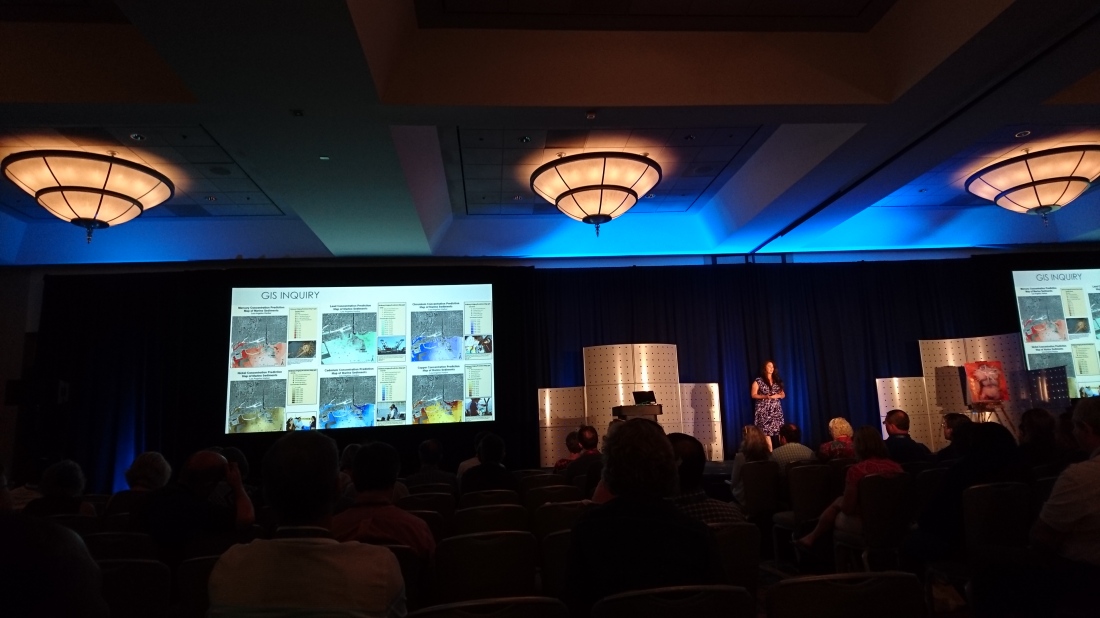 The second keynote was by Dominique Evans-Bye, Science Teacher, Clark Magnet High School. She gave a detailed presentation on teaching GIS in high school through project based learning – including diving and operating ROVs. She’s working with low income students, many are from immigrants families. The first project in 2006 that the students done was to analyse sediments and heavy metals in the Los Angeles Harbour. The students collected samples and then analysed the level of contamination in them, and visualising the information on a GIS. In the next stage, they examined contamination in lobsters and they analysed the tissues, with mass spectrometers. They found high arsenic levels. The students gain confidence, and learn through iteration and use the online tutorials of ArcGIS Online and offline to develop skills and use them to analyse their information. The exploration of the problem lead to new questions and ways to represent the information. The students are doing also applications with the Esri collector app, to understand how the litter can end up in the ocean. Another project involved them analysing albatross  migration. Through classes on environmental GIS which was problem oriented and based on all the skills that they’ve gain in operating the research process itself. The students are collaborating, and see the process from projects where they’ve been involved in data collection to analysis. Students experience collaboration with scuba divers from NOAA and other bodies. The students won awards and scholarships as a result of their effort. There are major benefits for creating a creative learning environment with high school students and allowing them to develop their learning through problem solving.

In an afternoon session, I presented a talk that Patrick Rickles prepared, titled GIS and Citizen Science: Combining Open Source and Esri Technologies. The presentation focused on the way that some of the technologies that are developed in the ExCiteS group, such as GeoKey and Community Maps, can work with Esri technologies. The presentation open by explaining the needs and requirements – the interdisciplinarity of the group, and the type of areas that we work with. He then demonstrate, using the work of Challenging Risk project in Seattle, which looks at participatory methods for community preparedness to earthquake and fire. The context of the project mean that there can be 2 way data sharing – from the community to local government so they can see the information in ArcGIS Online, and information from the open data store can be shared on Community Maps. Several other examples for Esri technologies that are in use are shown.