The Eye on Earth Summit, which was held in Abu Dhabi last week, allowed me to immerse myself in the topics that I’ve been researching for a long time: geographic information, public access to environmental information, participation, citizen science, and the role of all these in policy making. My notes (day 1 morning, day 1 afternoon, day 2 morning, day 2 afternoon, day 3 morning & day 3 afternoon) provide the background for this post, as well as the blog posts from Elisabeth Tyson (day 1, day 2) and the IISD reports and bulletins from the summit. The first Eye on Earth Summit provided me with plenty to think about, so I thought that it is worth reflecting on my ‘Take home’ messages.

What follows are my personal reflections from the summit and the themes that I feel are emerging in the area of environmental information today. 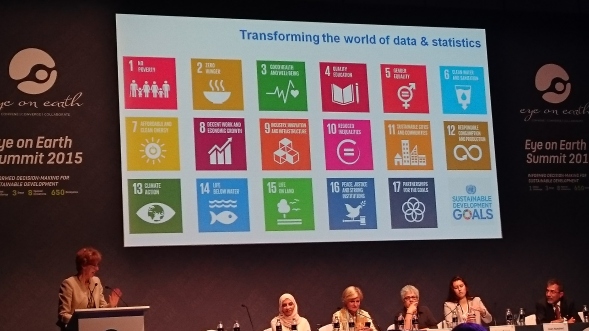 When considering the recent ratification of the Sustainable Development Goals or SDGs by the UN Assembly, it is not surprising that they loomed large over the summit – as drivers for environmental information demand for the next 15 years, as focal points for the effort of coordination of information collection and dissemination, but also as an opportunity to make new links between environment and health, or promoting environmental democracy (access to information, participation in decision making, and access to justice). It seems that the SDGs are very much in the front of the mind of the international organisations who are part of the Eye on Earth alliance, although other organisations, companies and researchers who are coming with more technical focus (e.g. Big Data or Remote Sensing) are less aware of them – at least in terms of referring to them in their presentations during the summit.

Beyond the SDGs, two overarching tensions emerged throughout the presentations and discussions – and both are challenging. They are the tensions between abundance and scarcity, and between emotions and rationality. Let’s look at them in turn.

Abundance and scarcity came up again and agin. On the data side, the themes of ‘data revolution’, more satellite information, crowdsourcing from many thousands of weather observers and the creation of more sources of information (e.g. Environmental Democracy Index) are all examples for abundance in the amount of available data and information. At the same time, this was contrasted with the scarcity in the real world (e.g species extinction, health of mangroves), scarcity of actionable knowledge, and scarcity with ecologists with computing skills. Some speakers oscillated between these two ends within few slides or even in the same one. There wasn’t an easy resolution for this tension, and both ends were presented as challenges.

With emotions and scientific rationality, the story was different. Here the conference was packed with examples that we’re (finally!) moving away from a simplistic ‘information deficit model‘ that emphasise scientific rationality as the main way to lead a change in policy or public understanding of environmental change. Throughout the summit presenters emphasised the role of mass media communication, art (including live painting development through the summit by GRID-Arendal team), music, visualisation, and story telling as vital ingredients that make information and knowledge relevant and actionable. Instead of a ‘Two Cultures’ position, Eye on Earth offered a much more harmonious and collaborative linkage between these two ways of thinking and feeling.

Next, and linked to the issue of abundance and scarcity are costs and funding. Many talks demonstrated the value of open data and the need to provide open, free and accessible information if we want to see environmental information used effectively. Moreover, providing the information with the ability of analyse or visualise it over the web was offered as a way to make it more powerful. However, the systems are costly, and although the assessment of the IUCN demonstrated that the investment in environmental datasets is modest compared to other sources (and the same is true for citizen science), there are no sustainable, consistent and appropriate funding mechanisms, yet. Funding infrastructure or networking activities is also challenging, as funders accept the value, but are not willing to fund them in a sustainable way. More generally, there is an issue about the need to fund ecological and environmental studies – it seem that while ‘established science’ is busy with ‘Big Science’ – satellites, Big Data, complex computer modelling – the work of studying ecosystems in an holistic way is left to small group of dedicated researchers and to volunteers. The urgency ad speed of environmental change demand better funding for these areas and activities.

This lead us to the issue of Citizen Science, for which the good news are that it was mentioned throughout the summit, gaining more prominence than 4 years ago in the first summit (were it also received attention). In all plenary sessions, citizen science or corwdsourced geographic information were mentioned at least once, and frequently by several speakers. Example include Hermes project for recording ocean temperatures, Airscapes Singapore for urban air quality monitoring, the Weather Underground of sharing weather information, Humanitarian OpenStreetMap Team work in Malawi, Kathmandu Living Lab response to the earthquake in Nepal, Arab Youth Climate Movement in Bahrain use of iNaturalist to record ecological observations, Jacky Judas work with volunteers to monitor dragonflies in Wadi Wurayah National Park  – and many more. Also the summit outcomes document is clear:  “The Summit highlighted the role of citizen science groups in supporting governments to fill data gaps, particularly across the environmental and social dimensions of sustainable development. Citizen Science was a major focus area within the Summit agenda and there was general consensus that reporting against SDGs must include citizen science data. To this end, a global coalition of citizen science groups will be established by the relevant actors and the Eye on Earth Alliance will continue to engage citizen science groups so that new data can be generated in areas where gaps are evident. The importance of citizen engagement in decision-making processes was also highlighted. ”

However, there was ambivalence about it – should it be seen as an instrument, a tool to produce environmental information or as a mean to get wider awareness and engagement by informed citizens? How best to achieve the multiple goals of citizen science: raising awareness, educating, providing skills well beyond the specific topic of the project, and democratising decision making and participation? It seem to still be the case that the integration of citizen science into day to day operations is challenging for many of the international organisations that are involved in the Eye on Earth alliance.

Another area of challenging interactions emerged from the need for wide partnerships between governments, international organisations, Non-Governmental Organisations (NGOs), companies, start-ups, and even ad-hoc crowds that respond to a specific event or an issue which are afforded by digital and social network. There are very different speeds in implementation and delivery between these bodies, and in some cases there are chasms that need to be explored – for example, an undercurrent from some technology startups is that governments are irrelevant and in some forms of thinking that ‘to move fast and break things’ – including existing social contracts and practices – is OK. It was somewhat surprising to hear speakers praising Uber or AirBnB, especially when they came from people who familiar with the need for careful negotiations that take into account wider goals and objectives. I can see the wish to move things faster – but to what risks to we bring by breaking things?

With the discussions about Rio Principle 10 and the new developments in Latin America, the Environmental Democracy Index, and the rest, I became more convinced, as I’ve noted in 2011, that we need to start thinking about adding another right to the three that are included in it (access to environmental information, participation in decision-making, and access to justice), and develop a right to produce environmental information that will be taken seriously by the authorities – in other words, a right for citizen science. I was somewhat surprised by the responses when I raised this point during the discussion on Principle 10.

Finally, Eye on Earth was inclusive and collaborative, and it was a pleasure to see how open people were to discuss issues and explore new connections, points of view or new ways of thinking about issues. A special point that raised several positive responses was the gender representation in such high level international conference with a fairly technical focus (see the image of the closing panel). The composition of the speakers in the summit, and the fact that it was possible to have such level of women representation was fantastic to experience (making one of the male-only panels on the last day odd!). It is also an important lesson for many academic conferences – if Eye on Earth can, I cannot see a reason why it is not possible elsewhere.